I tried polyphasic sleep back in 2006. After about 60 hours of pain, I gave up. I recently encountered some friends for whom it appeared to be working, though, and so I decided to give it another go last week.

In ‘06, I was attempting the “Uberman” schedule, six 20-minute naps in a day with no core sleep. Uberman is reportedly much more difficult to adapt to than the schedules where you get a night’s sleep, and my friends were on Everyman 3, so I tried it as well. Here, you get 3-3.5 hours of core sleep and take 3 20-minute naps during the day.

This time, I stayed on the schedule for a week. Long enough to determine that the road to adaptation was longer than I could tolerate. On day 7, things were not getting better. They were getting worse. My feeling of sleep deprivation started on day 2 of the schedule and remained through the whole thing.

Would this possibly work if I could stand the level of sleep deprivation required to adapt successfully? Possibly. However, I was incredibly unproductive during most of my time while sleep deprived. On some days I couldn’t code at all; on others, I could program, but only an hour or two. I judged it unlikely that I would ever recover the hours lost during the adaptation period, even if I did successfully adapt. And it was so incredibly painful, being sleep deprived with nothing I could do. 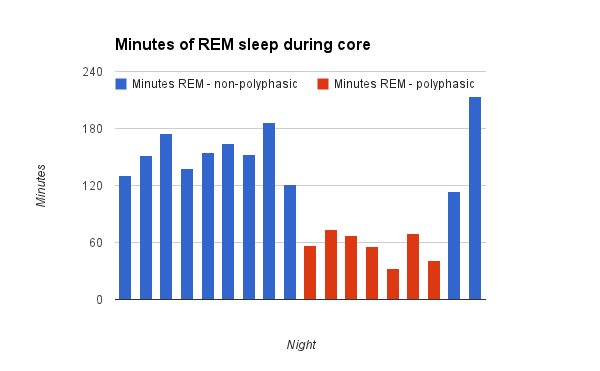 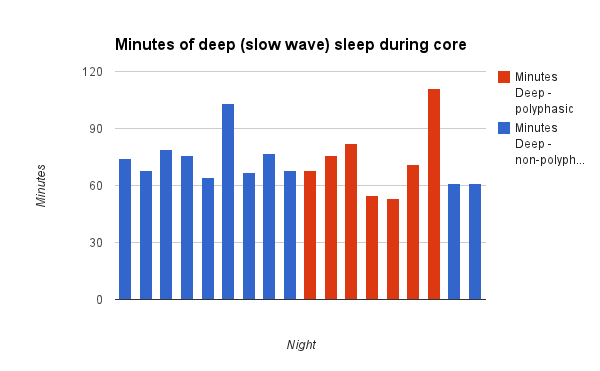 As you can see, I was REM deprived by maybe 90 min/night while on the polyphasic schedule, while my deep sleep hours hardly changed. I didn’t use the Zeo for most naps, but when I occasionally napped with the Zeo, it usually reported 7-11 min REM per nap. Even if I was getting 20 full minutes of REM sleep per nap, that would still only make up 60 minutes per day, not 90. Now, it’s arguable whether I actually need those 150 min REM per night, but considering that I also felt sleep deprived, I suspect that it was a real problem.