So far it has been quite easy and practical for me to eat mostly plant-based food in my life. When I go to restaurants I choose restaurants that have good veg options. 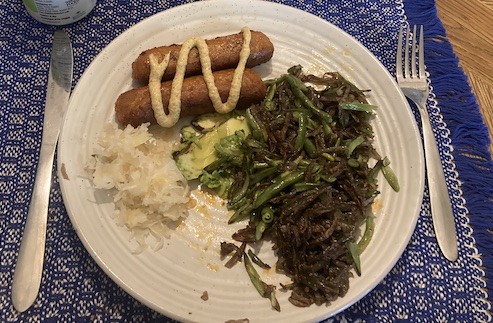 It’s not just vegans who want plant-based food. Ovo-lacto vegetarians are happy to be served it and basically never complain about vegan food, except maybe pizza. Kosher and halal observers will often skip meat at gatherings unless they can verify the status of the meat. Even omnivores when polled tend to agree that battery cages should be banned, despite themselves eating eggs from such sources – lots of omnivores are “reducetarians,” trying to eat less meat and fewer animal products, both for cruelty and environmental reasons. You can make it easier for them to achieve their goals.

Gatherings remain sometimes annoying – I go to a lot of gatherings where food is served for the group, and I’ve seen gatherings that go great for vegans and ones that have gone quite poorly. I’m talking planned dinner parties for 5 people, up to weddings with 140 people. And I’ve done a decent amount of event organizing myself. One of the changes I’m feeling best about in the last year is that I’ve started offering plant-based food by default when I’m hosting. It’s quite easy and is a great way to ensure that everyone gets enough to eat! And it is a moral win under most frameworks. But it does take a bit of planning (and also a bit of courage!)

Thankfully there are enough vegetarians in the world that there’s pretty much always a “veggie option” at gatherings. But such options are not always healthy, nutritious or vegan. Examples of things going wrong:

Guests who are inadequately fed then have to supply their own food or go hungry, both of which makes their experience a lot worse.

When presented with such options I can’t help but feel like the planners aren’t trying, and it gives me a bit of despair. Especially the weddings and other professional caterers – they have the skills to do a good job and it feels like instead they intentionally decided to do a bad job. It sucks that they are making plant-eaters feel like second class citizens. A lot of event planners seem to assume that omnivores strongly prefer eating animal meat.

Default to plant-based food for all

We should move to the opposite assumption: omnivores will be happy eating plant-based food as long as it’s sufficiently tasty and nutritious. This was true for me when I was an omnivore, and it seems to remain true for my omnivorous friends. Omnivores eat meat because it’s tasty and healthy, not because they intrinsically value meat-eating.

Making everything plant-based by default is a courageous position to take. You may expose yourself to criticism from people who are not accustomed to the food. But in my experience, if you provide good and healthy food, such criticism tends to vanish or be quite muted.

It’s still ok to offer non-vegan add-ons for those with special needs or strong preferences! For example, omnivores will often complain about the taste of vegan cheese, which (as of this writing) is usually not very good. Dairy cheese is relatively low-cruelty compared to eggs and meat, and is often easy to add as a topping, so I’m generally in favor of offering dairy cheese even though I don’t eat it myself anymore.

Breakfast can often be an annoying meal to plan, since people have so many non-plant-based comfort foods that they like to eat. Fortunately we can pretty easily put together a low cruelty breakfast:

Here are a bunch of crowd-pleasing ideas that are vegan-by-default or can easily be made vegan with little quality loss. Most are reasonably nutritious too.

Take care to avoid honey – a number of snacks (e.g. some granola bars, nuts, and baked goods) contain honey by default, which many vegans don’t eat.

You’ll probably want to design these meals on your own since there’s so much variety. But I’m going to offer a few principles:

A few meal ideas I really like to make that tend to be crowd pleasers:

And a few things that are popular but can be especially disappointing for vegans and so I don’t recommend: